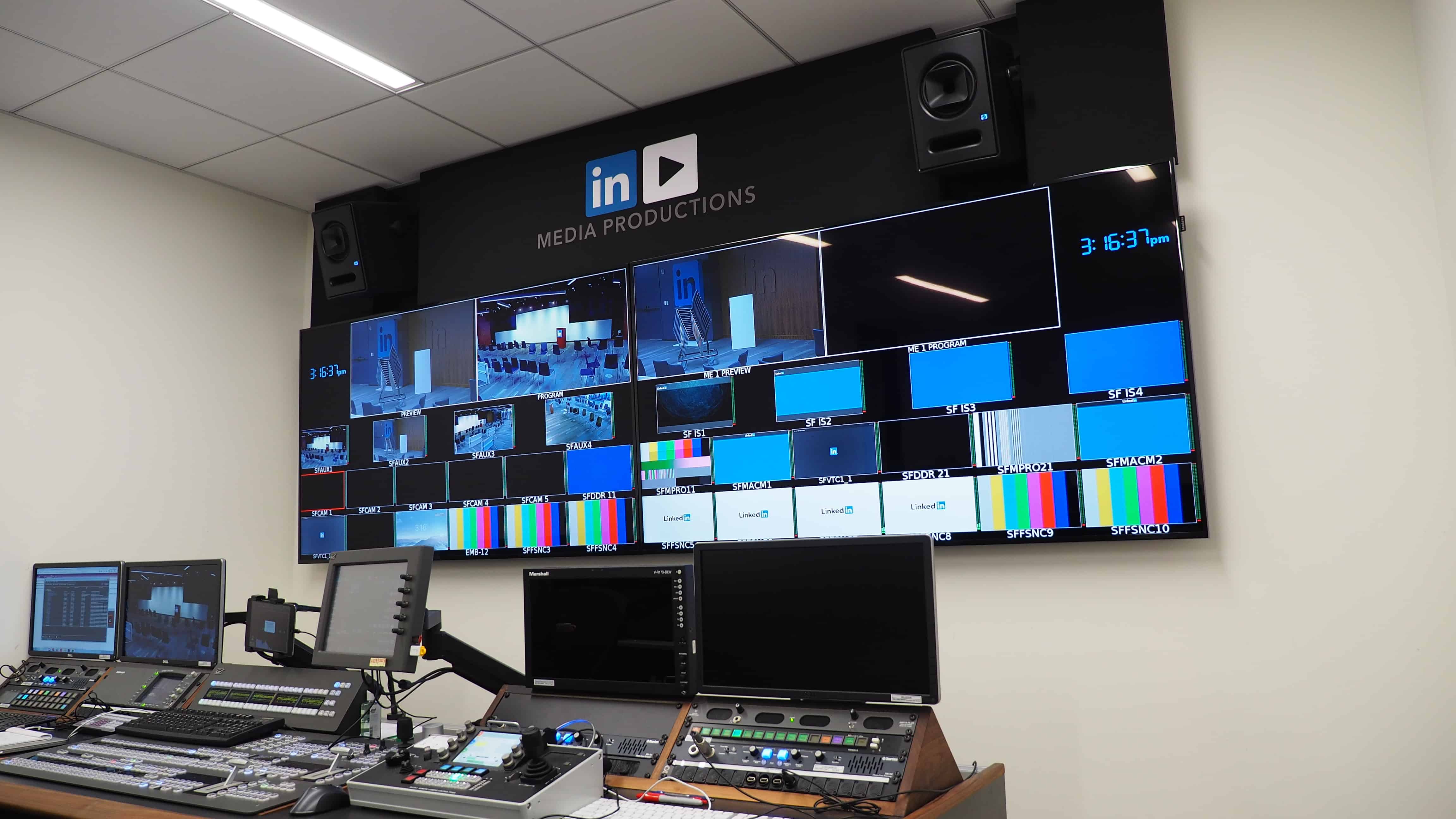 LinkedIn, the business-oriented professional network platform, is riding a technology wave with the recent introduction of LinkedIn Live, a platform for live video streaming. To support LinkedIn Live and other media ventures, Gary Schneider, LinkedIn’s Lead Media Systems Architect, has spent four years spearheading an initiative to enable LinkedIn to produce video and audio remotely, streaming broadcast-quality media over IP between production facilities worldwide. The leap from standard video conferencing to broadcast quality was a tremendous challenge for which Schneider required the kind of help most AV contractors couldn’t provide. Needing someone who could fully grasp his cutting-edge vision and make it a reality, Schneider turned to one of the few specialty AV integrators with the experience and expertise to pull it off: Richmond, California-based David Carroll Associates.

With more than 40 years in the AV industry, David Carroll has been involved in countless innovative and groundbreaking projects for a broad range of clients, from educational institutions to major corporations and entertainment giants. Today, DCA specializes in designing, installing, and maintaining integrated audio, video, and control systems for a wide variety of environments, tailoring every solution closely to the needs of each project. “David is an exceptional engineer,” asserts Schneider. “It’s great to work with somebody who is both agile and up to speed on the technology. A lot of the bigger integrators in the market are into quantity over quality but DCA is more into achieving quality in what we’re trying to accomplish.”

What Schneider is trying to accomplish is to build a remote production network. LinkedIn has invested in significant media production facilities at its Sunnyvale, California, headquarters and a few other locations in the San Francisco Bay Area. As the company planned an upgrade to its production facility in New York City’s Empire State Building, Schneider saw an opportunity to take the leap into remote integration. He sought, for example, to use real-time streaming between LinkedIn’s New York venue, which can host an audience for an event, and its control rooms on the West Coast, where a director and technical staff might reside, to produce content to support its sales and marketing services, internal corporate communications, and other ventures. 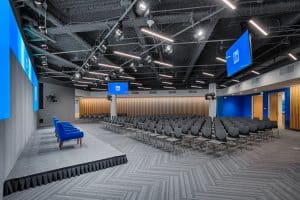 Schneider hastens to point out that this approach garners not only technical and creative benefits but also economic ones. “We get a consistency of product because the same control room and team is used for productions taking place all over, we leverage our capital investments in these control rooms, and we don’t have to send a large team out on the road, so we’re saving on travel and entertainment costs,” he details. “When I started at LinkedIn four years ago, we did productions where we would travel eight people and have an electronics mover ship all of our gear from the Bay Area to Los Angeles. Now, when we do that same event, we rent one rack and send two people.”

The initiative entailed what one could reasonably term “extreme integration,” incorporating products from many vendors, including Grass Valley, Net Insight, Arista, QSC, Riedel Communications, and TSL Products, onto a single network. It integrates just as many technologies, including (speaking just of audio) AES3, analog audio, Dante networking, and AES67—sometimes all running at the same time. “Our network design approach is to collapse VLANs to a good degree,” Carroll discloses. “A lot of manufacturers and projects go toward isolated networks because of concern about unexpected interaction between services. We tend to buck the prevailing engineering in that regard because we have advanced network engineering in our group and we’re able to really get in and see what’s going on. Fewer VLANS means better interoperability.”

Putting the system in place has been a long process, spanning a number of discrete projects over a four-year time span, but Schneider and Carroll view the effort more holistically. “It’s a rolling start, almost like a multi-site, multi-state lab project that continues to evolve,” explains Carroll. “The new installation in New York is a good example of this approach,” describes Schneider. “We had an editorial team in New York that wanted to do productions that could be streamed directly on our platform. We didn’t need a control room in New York because our vision was to do remotes, and our media operations team is based in the San Francisco Bay Area, where we have a video production studio in Sunnyvale. We could utilize the studio in Sunnyvale, a control room in the Bay Area, and editorial in New York and could just as easily stage events in the New York venue, use a control room in the Bay Area, and stream them live on our platform.” 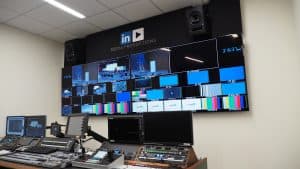 Getting all of the technology in place and working was hardly the extent of the challenges DCA and Schneider faced. There was also the issue of gaining acceptance of new methods amongst the production personnel. “What Gary is doing is a major disruption to workflow. You give a production team a system that allows them to do new things and they need to understand the benefits and why they should use it,” Carroll reveals. “A lot of back-channel work has been needed to bring a level of confidence to the producers and the tech staff and make them comfortable with the new workflows.” Schneider concurs, adding that “A big challenge on the LinkedIn side from day one was getting media operations people in the right mindset of understanding that it didn’t matter if they were 20 feet, 200 feet, or 4000 miles away from another facility they were working with.”

Finally, there is the fact that technology is not simply a moving target but a fast-moving one. Continual evolution has to be part of the long-term road map, especially when early adoption is a fundamental part of the project landscape. To handle this issue, DCA was involved with the project nearly from the beginning and has been part of forward-looking meetings with vendors. “The key to making early adoption work is doing the due diligence: the communication and the relationships,” informs Schneider. “We have meetings with all of our core manufacturers about what technology is coming down the line, and David has come to all of those meetings, along with LinkedIn network engineers.” And it is not enough simply to look ahead. “Another hurdle is keeping everything afloat and working during these transitions,” Carroll cautions.

Schneider and DCA are prevailing through all of these trials. The system was hard at work from the time it came online. “The New York facility went online last Friday, and on Wednesday we had two back-to-back shows that used the same control room,” recalls Schneider. “The first, ‘Transform Her,’ was a diversity event about women leaders in technology and other businesses, which was produced in Sunnyvale from the Empire State building All Hands venue. Then we did ‘Live with Marketers’ in the New York studio, which featured marketing professionals from New York and within LinkedIn, doing interviews in an Ellen/Oprah style with the couches and the nice chairs and the LinkedIn coffee mugs in the background. The old way to execute on those events would have required two complete teams, and involved traveling a bunch of people. That’s where the economy comes from with this system.” The system already has been used internationally, as well, with an event staged in Ireland being streamed to a Bay Area control room.

The project is far from over for Schneider and DCA, and perhaps will simply be an ongoing effort, but barely a month into operation, in spite of the numerous and substantial difficulties of being at the “bleeding edge,” the benefits to LinkedIn already are clear.

To watch the “Transform Her” production mentioned above, please click here.

To watch the “Live With Marketers” production mentioned above, please click here. 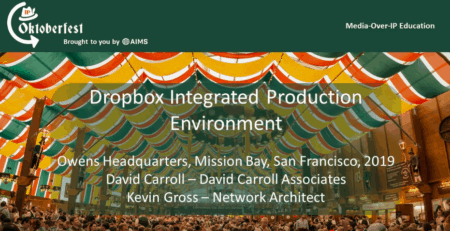 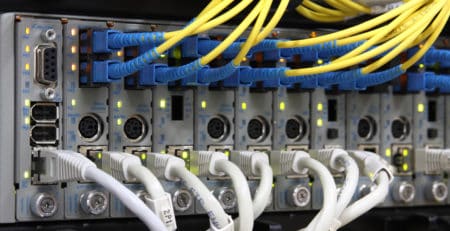 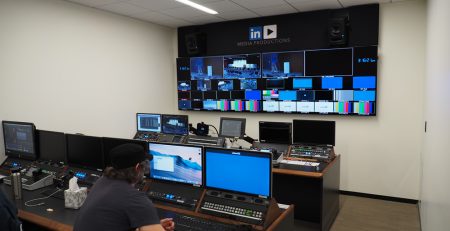 Successful Remote/At-home production between New York and California “My vision from the start was to achieve seamless production across multiple studios... 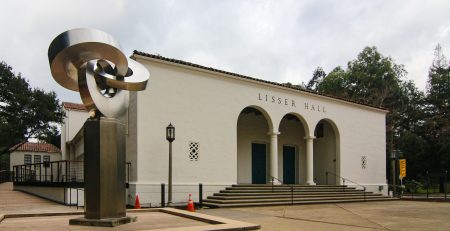 As one of the world’s fastest growing social media platforms, LinkedIn has become an essential part of how more than...